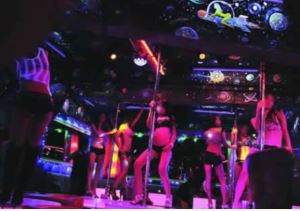 Some ladies who have been engaging in pleasure activities in Abuja have been apprehended for prosecution by a taskforce.

34 female strippers who play their trade at a popular night club in Abuja, Caramelo, have been arrested by the officials of the Federal Capital Territory Administration (FCTA).

It was also learnt that the front perimeter fence of the nightclub, which is located at Utako district of Abuja, was also demolished during the Wednesday raid in which 34 female strippers  were arrested.

Some of the nude dancers were from wealthy homes, while some of them were married and have children.Coordinator, Abuja Metropolitan Management Council, Umar Shuaibu, who confirmed the raid and arrest, said they stormed the nightclub with operatives of the Department of Development Control, Abuja Environmental Protection Board (AEPB) and the Social Development Secretariat (SDS).

“In response to security reports and complaints from the residents of area adjoining the location of Caramelo Night Club on plot 630 Cadastral zone B05 along T.O.S Benson Street within Utako District, the relevant authority deployed its officers to carry out surveillance in order to validate the complaints.

“The outcome of the surveillance revealed that the complaints are genuine and real. Please note that the substance of these complaints include, noise nuisance from loud party music, nude/strip dancing club activities intractable traffic challenge, resulting from uncontrolled patronage to the commercial nightclub within the residential precinct,” he said.

Hazard Is Not A Leader – Sarri