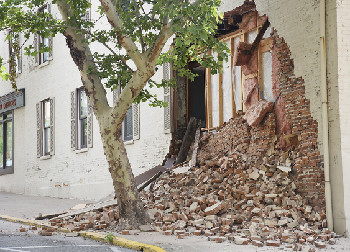 As many as six young children have been killed after a school wall fell on them while they were sleeping.

No less than six street children who were sleeping in a storm drain next to an elite school in the Ugandan capital have been killed.

According to the Agence France Presse, AFP, the police on Monday said the kids were killed after a wall fell on them.

“Due to a heavy downpour part of the perimeter wall of the school gave way, collapsed on the kids, killing six of them on the spot and two were injured,” Kampala’s deputy police spokesman Luke Owoyesigire told AFP.

“The police rescue team is on the scene to check if any person is buried under the debris.”
The spokesman said police were trying to establish the identities of the children and track down their families, adding that they had been sleeping in the storm drain for a while.
According to Owoyesigire, it was the second such incident recently, after five family members were killed last month as they slept in a mud and wattle house when a wall collapsed on them.

Joke Silver and her husband pictured with their...

As Obasanjo Licks His Vomit

GET 201: Fundamentals Of Electric Circuits (PDF)