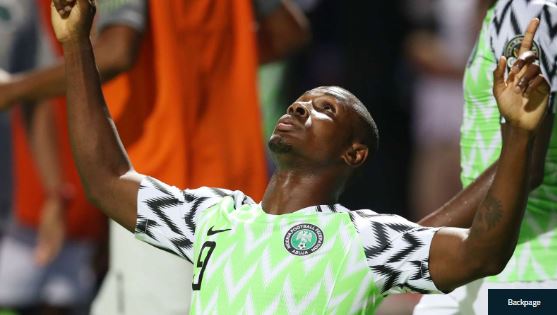 Following his match-winning heroics against Burundi, the China based forward is set to start for the Super Eagles on Wednesday.

Odion Ighalo is fit enough to start for Nigeria in Wednesday’s Africa Cup of Nations clash against Guinea.

Head coach Gernot Rohr confirmed that the 30-year-old has recovered sufficiently from the muscle injury suffered while on duty for Shanghai Shenhua.

The knock subsequently robbed him of a starting place against Burundi – although he made an instant impact in the encounter as a substitute where he got Nigeria’s lone strike.

Ahead of the important clash with the National Elephants, Rohr disclosed he will start against Paul Put’s side as the three-time African champions eye victory to qualify from Group B.

“Definitely, Ighalo is very fit and he will start the game against Guinea,” Rohr told media at the Alexandria Stadium.

Nigeria face the 1976 Afcon runners-up knowing that a draw will guarantee them a place in Round of 16. Yet, the German acknowledges the importance of the game claiming it will be decisive.

“It is a very important match because if we win this game, we are already through, so it will be a decisive game for us and for them,” he continued.

“Even if they (Guinea) lose, they still have a chance to be ranked among the best third placed teams.
“My problem at the moment is recover the injured players – we have two full back [Jamilu] Collins and [Abdullahi] Shehu – because that is my tactical problem at the moment.
“And the other good news is that [Samuel] Kalu is 100% fit and could play a part in the game.”
This is the first time both teams will be meeting in the history of the biennial football showpiece.

Impotent Man Begs Judge Not To End His Marriage In Oyo