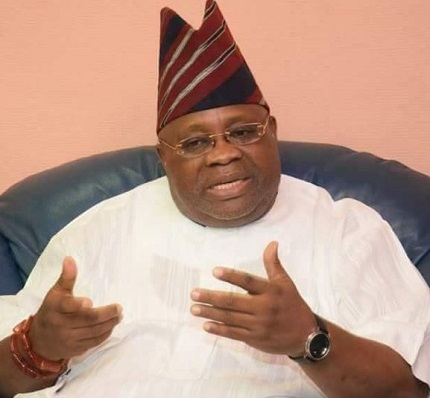 Adeleke was in 2018 arraigned before the court on allegations of examination malpractice and certificate forgery.

Two prosecution witnesses in the ongoing trial of Ademola Adeleke, a Nigerian senator, for alleged examination malpractice and certificate forgery Wednesday said he was not in the hall on the day the National Examination Council (NECO) held.

Odesola Emmanuel and Adigun Akintayo were presented by the prosecution to the Federal high court in Abuja as the PW3 and PW4 respectively.

He was in 2018 arraigned before the court on allegations of examination malpractice and certificate forgery.

He was arraigned alongside the principal of Ojo-Aro Community Grammar School, Aregbesola Muftau; the registrar of the school, Gbadamosi Ojo; and a teacher in the school, Dare Samuel Olutope, as well as Sikiru Adeleke.

The police accused them of fraudulently registering Mr Adeleke and another Sikiru Adeleke as students of Ojo-Aro Community Grammar School in Ojo-Aro, Osun State, for the National Examination Council’s June/July 2017 Senior School Certificate Examination in February 2017.

But while testifying against the senator before the court on Wednesday, the PW3, Mr Emmanuel, a teacher at Ojo-Aro Community Grammar School in Egbedore Local Government Area of Osun state, who supervised the NECO for June/July 2017, said he was not given the school album to enable cross check the candidates by the name and picture.

He said he knows Mr Adeleke as a public figure in Osun State but did not see him in the hall of 60 candidates that only 58 sat for the exam.

Mr Emmanuel added that during the exam, he observed that there were some elderly people, about four of them, in the exam hall.

When asked by the prosecution, Simon Lough, that if he the PW3 would be able to identify any answer sheet of that particular exam and Mr Emmanuel replied, YES.

When further asked how he replied by saying through the examination number, which ranges from 001 to 060.

Mr Emmanuel was shown the examination sheet and he confirmed that the number on the sheet is 057 with the name Ademola Adeleke.

The exam scripts and the result sheet were tendered by Mr Emmanuel and it was admitted as exhibit PW3A.

Under cross-examination by the first defendant lawyer, Alex Izinyon, the PW3 said there was no photo album for the 58 students who participated in the exam, with which he could have identified them one after the other with the identity cards issued to them by the exam body.

Mr Emmanuel added that although the availability of photo album was key to the exam, he, however, did not write any report on its absence and the consequences on the exam.

Answering a question. Mr Emmanuel stated that it was not possible for NECO to issue result for any student who did not participate in its examination, adding that he would be very much surprised if such a thing happened in the case of Mr Adeleke.

In his part, the PW4, Mr Akintayo said although the senator was not in the examination hall, Sikiru Adeleke was present and he took part in the exam.

Under cross-examination, Mr Akintayo said if a candidate sits for an exam, he is entitled to a result.

Mr Akintayo added that “to the best of my knowledge, the examination was free and fair.

Meanwhile, the judge, Iyang Ekwo, adjourned to June 10 and 11 for continuation of trial.

I want a sugar mummy that won’t tap my destiny – Nigerian cross-dresser, Tunde

Photos: FUTA VC danced it all at Campus...