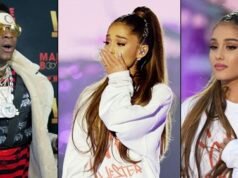 Rapper Soulja Boy as part of his recent rants on social media, has said Ariana Grande is a thief and that she stole his swag and should give him credit.

Yesterday, he posted a video to that effect. And today, he went in on her on Twitter, calling her a thief, saying he needs his credit.

Soulja Boy (Young Drako)
@souljaboy
Lol stop stealing my swag. Word
Ariana Grande @ArianaGrande
Replying to @ArianaGrande
shift your attention here. these wom are impeccable and they are who you should be talking about. love.

Soulja Boy isn’t the only one crying foul on Ariana’s new single either. Rapper Princess Nokia also took to social media to play “7 Rings” alongside her single “Mine,” citing similarities.
“Does that sound familiar to you? ’Cause that sound really familiar to me,” Princess Nokia says in a self-recorded clip.”Ain’t that the lil song I made about brown women and their hair? Hmmm… sounds about white.”

Nigerian man whose son has days to live,...