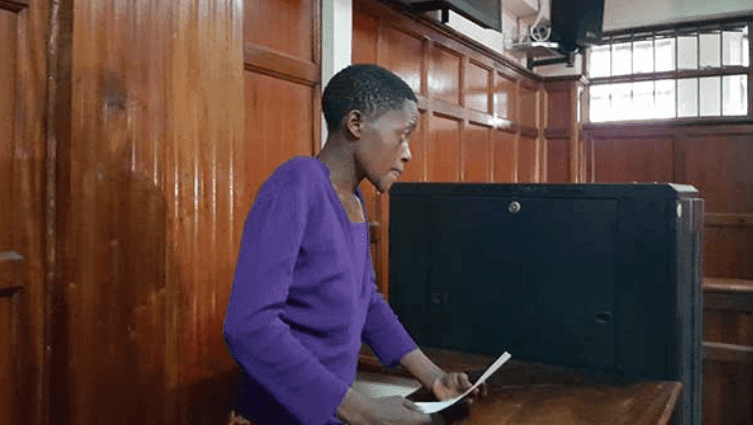 A 23-year-old woman has been charged with defiling a boy in a police cell where they had been detained for different offences.

But when she appeared in court on Wednesday, Naomi Nechesa Sanya denied that she engaged in sex with the underage boy at the Riruta Police Station in Kenya on Sunday night.

Senior Principal Magistrate Kennedy Cheruiyot heard the accused, who is being investigated for the offence of murder, met the complainant along the corridors of the police station cells.

“The 15-year-old boy had been arrested over a drug-related offence and could not be detained with adults in the cells,” State prosecutor Kennedy Panyako told the magistrate.

The prosecutor said the boy was in the corridors of the police station when the accused bumped into him. The accused denied two counts of defilement and indecent assault.

Nechesa applied to be released on reasonable bond terms, saying “I have an 11-month-old baby who is breastfeeding.” She further pleaded, “Since my arrest and detention on Sunday I have not seen my baby neither have I breastfed her.”

The accused told the magistrate it is the child’s right to be breastfed and separating her from her mother is a breach of the baby’s rights to suckle and to motherly care and attention.
“I urge this court, in the name of my child’s rights, [to] release me on bond or direct police to go to my residence and pick my baby and reunite her with me at the police station,” Nechesa pleaded.

She said that she will plead guilty to the murder charge once investigations are completed. Mr Panyako opposed the bail plea, saying murder investigations were underway.

In his ruling, Mr Cheruiyot directed police to reunite the woman with her baby so that she can breastfeed her.

The magistrate further directed that Nechesa remain in custody to help police to conclude the capital offences investigations.

Andy Ruiz Is Digging His Own Grave –...

Two university students drown in a river while...

Best Story Ever: AMAKA DISAPPOINTS ME

WIN 3GB DATA BUNDLE: Get These Answers And...

Businessman fakes own kidnap, demands N10m from his...