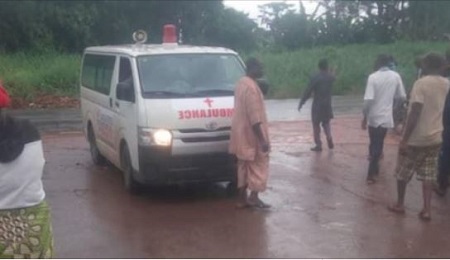 The ambulance was conveying drugs used in treating lassa fever patients to an undisclosed location, when the attackers struck.

An ambulance conveying medical equipment was attacked at the boundary between Ondo and Edo states on Friday.

TheCable gathered that some medical officials were inside the ambulance, a white Toyota Hiace bus, when it was attacked.

A source said the ambulance was conveying drugs used in treating lassa fever patients to an undisclosed location, when the attackers struck.

“The team was traveling in the bus (ambulance) to deliver the medical equipment meant to fight the Lassa Fever when the gunmen struck on Benin road,” the source said.

“They ambushed, and attacked the medical team and later shot at the security personnel in the vehicle as I was told, they kidnapped those in the ambulance.”

TheCable could not reach Femi Joseph, spokesman of the Ondo police command, as of the time this report was filed. His telephone line was out of reach.

Ondo is among the states where the government is tackling insecurity.

Earlier in the week, Rotimi Akeredolu, the governor, narrated  how suspected kidnappers targetted his convoy.

He said his security aides had to open fire before the suspects fled.

Laugh All Day with these Jokes

Tonto Dikeh shares photoshopped image of her getting...

Nigeria vs France World Cup Clash: How We...

Drama As Union Congress was thrown into confusion...