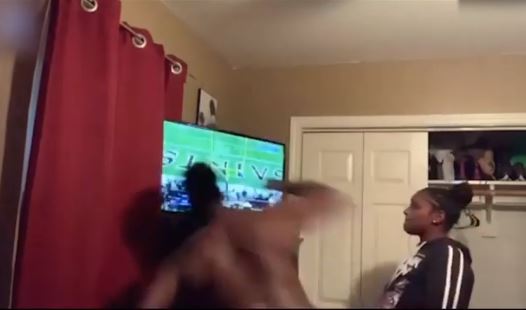 Out of great disappointment, a man has destroyed his TV set with a single punch after his football team failed to win.

The video below shows the moment a football fan punched a TV screen in anger after his team failed to win the Match.

It was clearly observed that the footage was filmed in a location believed to be in the U.S., the sport enthusiast became irritated when the game does not pan out quite the way he would have liked it to.

As he launches his fist at the flat screen television, the screen drops to the floor and shatters. He then continues to swear profusely before walking away from the screen.

A woman, who is seen in the room with him, stares in disbelief at the exact place that the TV screen once stood before walking off screen.

The disgruntled football fan continues to swear as the woman states: ‘We ain’t got no TV’.

Despite no longer having a TV the football fan’s anger continues as he says: ‘I’ve been cheated man’.

Watch the man below

VOICE OF THE STUDENTS: NANS needs to be Scrapped for Shying away from their responsibilities