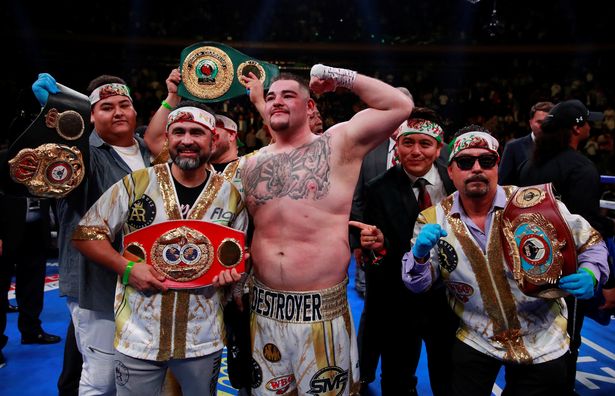 Following Joshua’s shock loss to Andy Ruiz Jr, the boxer has demanded $50 million for a rematch.

Andy Ruiz Jr has boldly demanded £40million ($50million) to rematch Anthony Joshua in the UK, The IrishMirror has reported.

The huge underdog sprung a seismic shock last weekend to drop Joshua four times before stopping him in the seventh round.

The Brit immediately triggered the rematch clause with the second fight due to take place in November or December.

Cardiff’s Principality Stadium is the frontrunner to host the second installment with Madison Square Garden and the T-Mobile Arena also in the frame.

Ruiz is likely to pick up £10m for the rematch, double his purse for his first clash with Joshua – but he is ready to demand more.

“Right now my team, they’re negotiating everything right now. I’ve just got to stay busy, stay healthy and be ready for the rematch,” he told Fight Hub.

“I’d love it to be here in the United States or in Mexico you know. It all depends on the team and what they negotiate.

“If they want me to go over there, they’ve got to give me $50million. If they want to come over here… It’s just negotiations you know.”

Ruiz is keen to host the fight in Mexico but that is highly unlikely with the terms of the rematch already agreed through the original contract.

And Joshua is confident he will reclaim his place at the top of the heavyweight division.

“Congratulations to Andy Ruiz, he has six months to be champion because the belts go in the air and he’s going to have to defend against myself,” he said.

Congrats! Yinka Ayefele's Wife Gives Birth To Triplets In US

It Was Always Me, Pogba Or Sanchez To...