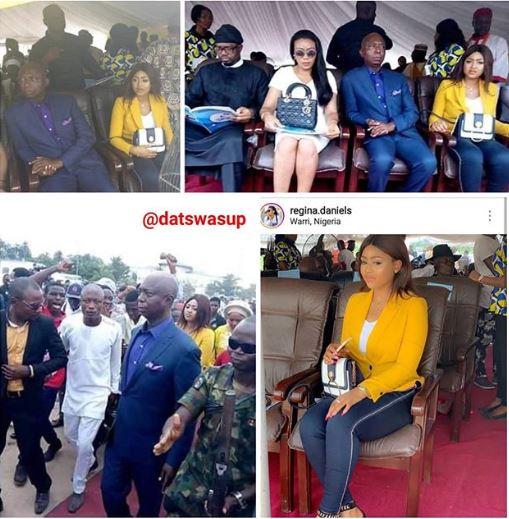 Actress Regina Daniels has raised suspicions after she was spotted on several occasions with billionaire, Ned Nwoko.

The alleged marriage of the 19 year-old Nollywood actress, Regina Daniels and Ned Nwoko, may be true as both were spotted dancing together in an event anchored by singer Harrysong.

They attended a ceremony together, yesterday, when Nwoko received an honorary doctorate degree from Federal University of Petroleum Resources Effurun, FUPRE, Delta State.

This however, is the first time they are seen together in public since the rumored news of their marriage began to circulate.

Both Regina and Nwoko have not debunked the rumor since it started circulating in the social media.

However, Ned Noko is known as Prince Chinedu (Ned) Munir Nwoko. He is a Nigerian lawyer, politician and businessman.

He was a member of the Nigerian House of Representatives between 1999 and 2003. Nwoko is a Muslim. He represented Aniocha North-South and Oshimili North-South.

Nwoko got his first degree in Law and History from the University of Keele in Staffordshire, United Kingdom, followed by King’s College London where he graduated with a Masters in Law. He got his honorary doctorate from the Commonwealth University College in Belize.

He married five wives. If his marriage relationship with Regina is true, he would undoubtedly have six wives.

Nigerian Footballer, Abdullahi Nura Forced To Retire At The Age Of 21 Due To Heart Problems

BBNaija: 'Gedoni Is Deceiving Khafi, She Is Blindly...

STORIES: The Minister's Son and I – chapter...