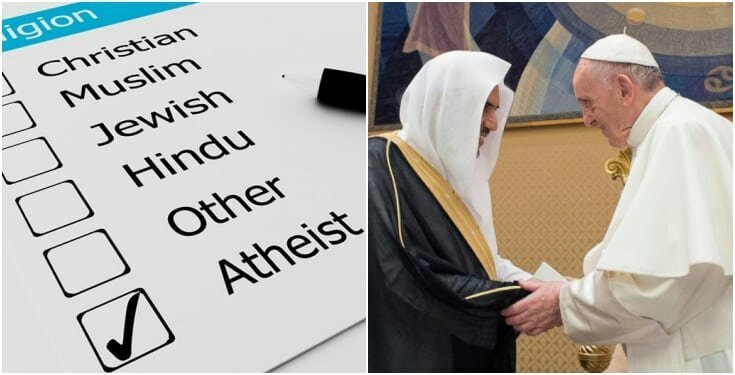 A Nigerian man while decrying the rate of hypocrisy among religious people, has said it’s better to be an Atheist than being a Christian or Muslim in Nigeria.

The man, identified as Michael Nwanator on Facebook, wrote that while Nigeria is recognised as the most religious country in the world, it is also the poverty capital of the world and he wonders what the benefit of religion is to the people of the country.

I think it’s better to be an Atheist than to be an average Nigerian Christian and Muslim.
Nigeria is the most religious nation in the world and the poverty capital of the world. Over 91 million are living below poverty line. Over 91 million people are EXTREMELY POOR. The number keep increasing everyday.

Nigeria is attributed to anything bad in the international community.
Less religious countries prosper than us. To me, Nigeria is 1,000 years behind China 🇨🇳 and Japan 🇯🇵.

If religion can’t make us live a moral upright life, what use is the religion?
What do they teach in religious gatherings in Nigeria 🇳🇬?

I don’t think there’s any Atheist holding a top government position in the country🇳🇬. On Friday and Sunday, you will see them in their various religious places, but why are we in this mess?
I need answers.
Singing Hypocrite by Falz 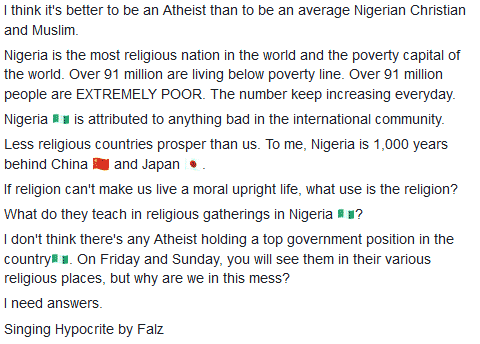 Wizkid is overrated burns boy is better do...