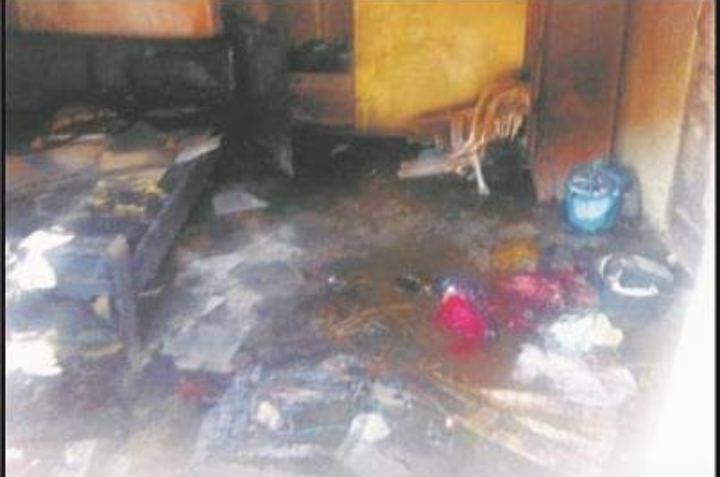 Deji Adenuga, a jealous lover, has set ablaze a family of nine in Okitipupa Local Government Area of Ondo state, Stechitegist has learnt.

Love turned Sour, when a jealous man set Ablaze a family of nine because he had invested much on his ex-girlfriend.

Adenuga’s evil action in setting ablaze the family followed a dispute between him and his girlfriend identified as Titi Sanumi, which forced the latter to quit their long-time relationship.

“We gathered that he decided to set the house on fire to punish Titi and not even knowing that the lady had travelled outside town the previous day after their big fight.

It is sad he killed innocent persons in the family house while he himself has run away from home after perpetrating the evil act. Police have visited the scene and promised to investigate it.”

Our correspondent gathered that the incident occurred on Adetuwo Street near a popular hotel in Ayeka/Igbodigo on Igbokoda Road, Okitipupa, at about 2:35 am on Tuesday.

Stechitegist learnt that Adenuga, an ex-convit, brought a jerrycan laden with petroleum in the midnight, gained entrance into the building by breaking a window, and sprayed the family while they were asleep.

Two of the family members immediately died in the fire while the remaining seven were rushed to the Trauma Centre, Ondo, where they all gave up the ghost.

The dispute between the suspected arsonist and his estranged lady was said to have been reported earlier at the Okitipupa Divisional Police station, and settled.

However, dissatisfied with the settlement by the Police, the suspect was said to have stormed her family house to set it ablaze.

Sources who further confirmed the incident said the lovers had been in a relationship for four years, which is known to everyone on the street.

Stechitegist exclusively learnt that Adenuga was angered that Titi decided to quit the relationship after he had invested heavily in her.

One of the sources, Femi Adeusi, narrated how the two lovers had been having disagreements.

Adeusi, a close friend to the lovers, said: “What really happened was that both of them had been having dissagrements in recent times and the guy always told us how he had invested in the lady.

“But things became bad when Titi told his boyfriend that she could not cope with the relationship again due to daily disagreements. They had to drag themselves to the police station for settlement. Also, we tried to make them come back and play mature but it’s like there is a secret between them that is dark to us because not even Deji was willing to make peace.

“It was like a filmtrick when we were told that he went to set the family’s house of Titi on fire and people who were sleeping in the building died in the inferno and few of them could only escaped.

“We gathered that he decided to set the house on fire to punish Titi and not even knowing that the lady had travelled outside town the previous day after their big fight. It is sad he killed innocent persons in the family house while he himself has run away from home after perpetrating the evil act. Police have visited the scene and promised to investigate it.”

Femi Joseph, spokesman of the Ondo State Police Command, confirmed the case to Stechitegist saying: “One Victor Alade came to report the case to the Police… that seven of his family members were set ablaze in their sleep.

“He told us he suspected one Deji Adenuga but that he ran away from town after perpetrating the evil act. Investigation has already commenced. Our officers visited the scene and evacuated the corpses. So, I can assure you that our officers are already on the trail of the suspect, and in no distant time we shall apprehened him.”

Two university students drown in a river while...

“She is pained” – Bobrisky reacts to getting...