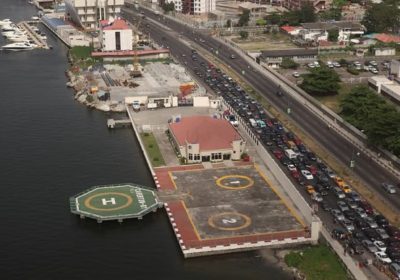 Lagos is home to 22 million people. Already much larger than cities such as New York City and London it’s adding 77 residents per hour as people move from less industrial parts of Nigeria.

By 2100 Lagos will be the world’s largest city, home to between 85 million and 100 million people, according to demographers.

There are many unoccupied apartments in wealthier neighbourhoods such as Ikoyi with rentals of around $20 000 (R293 870) per month.

Adding to the housing woes in Lagos; some building don’t allow women to rent if they live on their own.

Eko Atlantic and it’s 8.5 kilometres of surrounding wall (dubbed “The Great Wall of Lagos”) has many detractors, however.

Notorious Cult Leader 'General' Arrested With 21 Others In Lagos (Photo)

Delta state has been covered with great flood

Waw! Man Kills Wife For Starving Him Of...

Undergraduate Who Took Up Teaching During ASUU Strike...