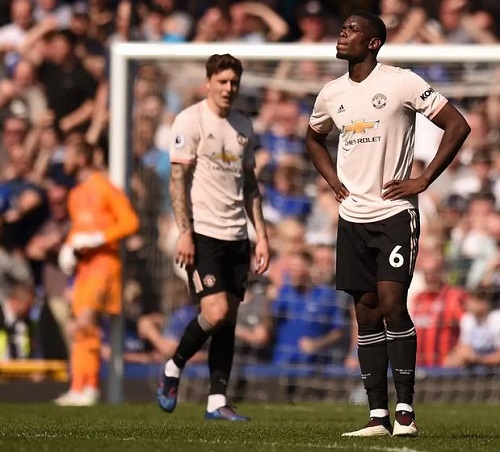 Manchester United’s hopes of clinching the top four in EPL suffered a debilitating setback on Sunday with a 4-0 thrashing by Everton.

Manchester United’s hopes of finishing in the Premier League top four took a huge blow after a rampant Everton side thrashed Ole Gunnar Solskjaer’s side 4-0 at Goodison Park.

Richarlison and Gylfi Sigurdsson put the Toffees two up at the break and, despite changes from Ole Gunnar Solskjaer in the second half, strikes from Lucas Digne and Theo Walcott condemned United to their worst defeat since October 2016.

Solskjaer made three changes from the 3-0 defeat to Barcelona, with Ashley Young the most high-profile absentee after his error at the Camp Nou.

It proved to make little difference, however, as a sluggish United side struggled to get going in the early stages.

And it didn’t help that Everton, on the back of a poor performance against Fulham last time out, had something to prove. Boosted by the crowd, Marco Silva’s side pressed forward at every opportunity and nearly took the lead after 10 minutes of play. 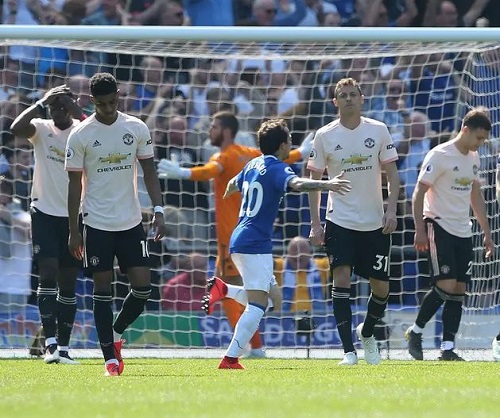 Sigurdsson whipped in the cross from the right and it evaded everyone but Richarlison at the back post, who muscled out his compatriot Fred and unleashed the snapshot which David De Gea did brilliantly to save.

But the Spaniard was powerless when facing the 21-year-old just two minutes later. Lucas Digne launched a dangerous long throw into the box and after a flick from Dominic Calvert-Lewin, Richarlison executed a stunning bicycle kick to finish emphatically from close range

But the Toffees weren’t done there as they continue to pepper the United penalty area with a flurry of corners and crosses, with the visitors really struggling to get out of their own area.

Things didn’t get much better as the half went on as United struggle to create anything and when Sigurdsson was given far too much space to run into, the Icelandic playmaker powered a trademark long-range effort into the corner to make it 2-0.

After failing to test Jordan Pickford, Solskjaer knew his side had plenty of work to do in the second half and sent on Scott McTominay and Ashley Young at the break for Fred and Phil Jones.

But the Norwegian was greeted with the same lifeless display as he got in the first half despite his animated antics on the touchline and they soon found themselves heading for a fifth straight defeat on the road when Lucas Digne’s first-time half-volley from the edge of the box found the bottom corner.

It was exactly the kind of performance from both sides which showed the scoreline was just and Everton soon made their dominance count when Theo Walcott burst clear of the defence and slotted past De Gea.

United were flat, lethargic and defeated and it took until the 85th minute for their first shot on target when Anthony Martial’s shot was comfortably saved by Pickford. That summed up a dismal afternoon for Solskjaer, who will know now just how much rebuilding this squad needs in the summer.

Lady's Declaration Of Love For Her Boyfriend Is...

Suspected kidnapper gunned down by police officers in...