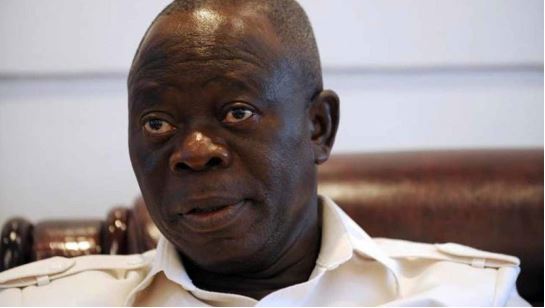 The lawmaker spoke on Sunday during a Thanksgiving Service he organised in his hometown at Ilase-ijesha, to appreciate people of his senatorial district over his electoral triumph.

The Senator representing Osun East Senatorial District, Francis Fadahunsi has said that the National Chairman of All Progressives Congress, APC, Adams Oshiomhole, was by his behaviour exhibiting traits of the head-boy of a primary school.

He added that members of the ruling APC, who had ambitions during the just-concluded leadership election in the National Assembly, ignored Oshiomhole and disregarded his directives for being too shallow and childish.

The lawmaker spoke on Sunday during a Thanksgiving Service he organised in his hometown at Ilase-ijesha, to appreciate people of his senatorial district over his electoral triumph.

According to Fadahunsi, both the Senate President, Ahmed Lawan, and the Speaker, Femi Gbajabiamila, campaigned vigorously across party lines for them to emerge, adding that had it been that both of them relied and listened to Oshiomhole’s directives, the elections would have gone the other way.

He opined that the consciousness for competence and vibrancy, irrespective of party affiliations, in which the NASS elections were predicated, must be sustained to maintain a peaceful and successful parliament.

Fadahunsi, who won election on the platform of Peoples Democratic Party, PDP, called for masses-oriented legislation in the ninth National Assembly to better the lives of ordinary Nigerians.

He said, “What is called National Assembly is not a one-party affair. It is an assemblage of people from diverse orientations and world views; it goes beyond parochial and myopic thoughts of an individual .

“I know how Lawan and Gbajabiamila really campaigned amongst different parties that made up the Senate and House of Representatives, ignoring that childish directives of their chairman which lacked human dignity.

“It is certain that if all that Oshiomhole said about chairmanship of committees of the National Assembly could be followed, both the Senate and House of Representatives would be hot,” Fadahunsi said.

Speaking on the spate of insecurity in Osun State, the lawmaker said the move by suspected Fulani herdsmen to cause security breaches in the South West has been discovered long ago, regretting that governments in the states that make up the region have not been proactive in their approach to tackle insecurity.
He also blamed traditional institution in the zone for being too relaxed in their domains in the face of suffocating external aggression.
“I think there is need for our royal fathers to have a rethink on the way lands are being handed over to some foreigners for undisclosed purpose so that we will not be handing over our lands to those who will later constitute security threat to our people.
“On our part, we are making efforts to curb this menace by all possible means, and we have started getting results. We are also encouraging local Fulani herdsmen to help us in identifying criminal elements among them,” he said.