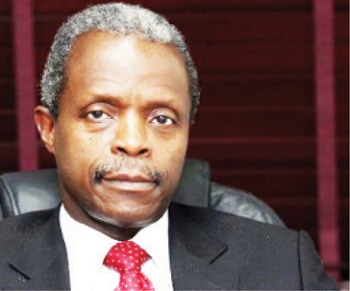 There is a saying that two good heads are better than one. This saying is false if compared to Nigeria leadership structure.

Presently, what we have is one good head, Osinbajo and one bad head, Buhari. As a result, the saying does not apply.

This is inferred from the successive success Osinbajo had achieved during his occasional stincts as the Acting President.

Looking at the Offa Robbery and seemingly incompetence, politicization that has dodged the occurrence courtsey of a massive incompetent man called Ibrahim Idris.

It would have been another kettle of fish if Osinbajo is Nigeria’s President. He would have wielded the big stick on Idris for his poor handling and politicization of this incident. Several months after the killings, no one has been arrainged for this rather than the prime suspect who died under the watchful eyes of Idris. This is a serious setback to the enforcement of justice in  this democratic era.

Why is it that the IGP has continued to act as a cog in the wheel of our nascent democracy? First in Anambra, later in Benue, now in Akwa Ibom. In Akwa Ibom, Idris  believes 5 members of the state House of Assembly is greater than 21 and the state has been thrown into anarchy.

Why the unending politicization of the NFF by this man that naturally should have proceeded on leave as he is due for retirement in few months?

Can we ask ourselves why Ibrahim Idris is still the IGP despite his incompetence and politicization of the Nigerian Police?

Can we start with the poor welfare of officers of the NPF under Idris that made them recently protest in Imo. Why is it that their welfare is not taken care of? Why is it that the IGP is personally pocketing over one billion naira annually from the fees of Police officers on special duty of which he has Ben running away from NASS probe? Why did Ibrahim Idris order the arrest of Deji Adeyanju for protesting against the politicization of the NPF?

Why is President Buhari overlooking all his inadequacies?

Daura did not do half of this before Osinbajo fired him. Is Buhari too weak to deal with Ibrahim Idris? Osinbajo has shown several times that he is the better part of this pair and it is disgusting to say the least that we have an incompetent man as President.

This is a red flag to National Security and the 2019 elections. President Buhari must not allow an incompetent man like Idris around him. If he is doing that then it speaks volumes about his leadership abilities and should learn from Osinbajo.

GOOD NEWS!! Now You can activate your new...

Boko Haram Claims Responsibility For Shooting Down The...