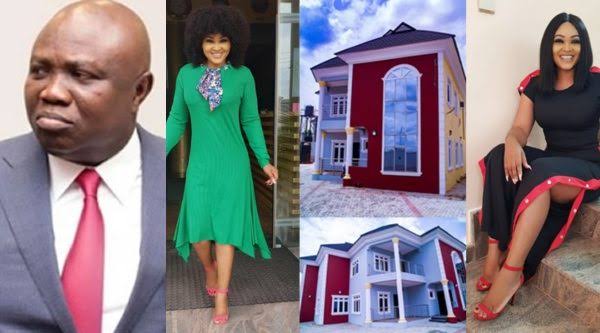 The rumour that she was secretly romancing the embattled Ambode who was denied a second term in office after falling out with his Godfather, Asiwaju Bola Ahmed Tinubu, started when the 41-year old announced the acquisition of a multi million naira house in Lagos State last year, 2018.

And then months later, she also bought an exotic Prado jeep, expensive clothes and shoes coupled with frequent trips abroad.

Speaking to a gathering of Nigerians in Canada, the woman of Edo descent and University of Lagos graduate denied ever meeting Ambode.

“I want to set the records straight, I do not have anything to do with him (Ambode) but you the truth about life is that when you doing well and people don’t know your source, they keep speculating, they keep fabricating alot of things just because they do not know your source. Olorun a tu bo ma bo wa lasiri o (May God cover out secrets Yoruba language). You know so that’s just it.”

It should be noted that majority of the actresses who rarely feature in movies flourish financially while most of their seemingly hardworking male counterparts wallow in penury and survive on the rare benevolence of the wealthy class.

“I do not have anything to do with him. I have not met with him one one one. Where that rumour came out from I do not know. But it is fine, he is a governor” she said amidst cheers from the people present.

View this post on Instagram
Alleged Affair: “I have not met Gov. #Ambode before,” actress #MercyAigbe cries out again in Canada
A post shared by Instablog9ja (@instablog9ja) on Jan 13, 2019 at 1:39am PST

We have brains in Abundance, while other parties...

Buhari, Atiku Have No Plan To Develop Nigeria-...

WhatsApp is about to make a big change...