Home » Whenever you search Google, you’re consulting Ifa the Oracle – Ooni of Ife 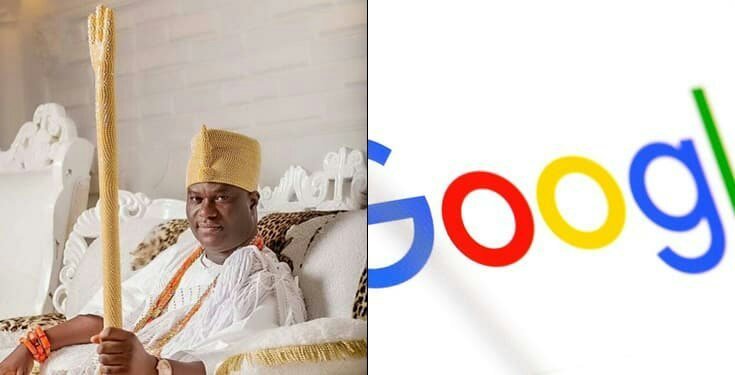 The Ooni of Ife, Oba Enitan Ogunwusi, on Wednesday said that whenever anyone makes a search on Google, they are consulting Ifa the Oracle.

The traditional leader said that without ‘Ifa’ , Google would not have been created News Agency of Nigeria reports.

Ogunwusi said this during the press tour of the tourists sites within the ancient city ahead of the Tourism Innovation and Development Innovation Conference (TIDA) slated for April 24.

The theme of the forthcoming conference is:” Impact of Sustainable Tourism Development and Marketing of Tourism Destinations on Host Communities”.

Odu Ifa’ refers to the verses of the literary corpus that are usually consulted by people who believe in its efficacy before embarking on any project or activity.

It is also a West African religion and system of divination
Ogunwusi said that ‘Ifa’ as a form divination was all about sourcing for information and knowledge through traditional consultation.

The traditional ruler said that Google could be regarded as the modern way of sourcing for past information and what was likely to happen in the future too.

He said that ‘Ifa’ originated several thousands of years ago and is seen as the voice of the almighty God referred to as ” Orisa Oke” which is supreme to other lesser gods.

” Without ‘Ifa’, there could never have been the google, so the google is the modern-day version of ‘Ifa’ .” ‘Ifa’ is all about information, getting knowledge from the Almighty God.

“Whenever you search the google for information or knowledge, you are consulting ‘Ifa’; and without ‘Ifa’, there would not have been the google.”

He said that ‘Ifa’ was still relevant in contemporary time t saying that was why people were still consulting the oracle for information and solutions to their problems.

Ogunwusi explained that if the modern day youths and the educated wanted to know the date of any important event, they would search for it from Google.

‘That is part of the functions that Ifa’ does for its believers and followers; that is the truth but it may sound strange, ” he said.
The Ooni who is the custodian of the Yoruba culture and tradition called on Nigerians to embrace traditional worships peculiar to their communities.

He said that would not stop them from practising other modern religions.

See The Player Named As Most Valuable Premier League Player

Wedding Anniversary: My Wife's Breast has been comforting...