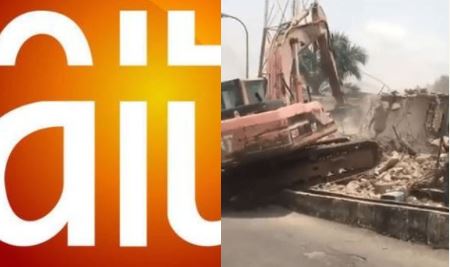 Private guards attached to the property were ordered to leave the building by officials of the Nigeria Police Force.

FCT administration who confirmed that it demolished AIT structures at Padoma Hill, Asokoro, Abuja stated that it was over an alleged illegal encroachment.

It was gathered that bulldozers backed by armed policemen stormed the AIT premises around 11am and pulled down the gatehouse, a portion of the fence and a building close to the fence.

According to the private guards attached to the property, the armed policemen ordered them to leave building.

“Specifically, in November last year, the management of DAAR Communications led by High Chief Raymond Dokpesi paid a courtesy visit to the FCT Minister and they were received on his behalf by Chief of Staff to the FCT Minister, Bashir Mai-Borno who led the FCTA team made up of relevant directors and others in the discussions.The purpose of the discussions was to resolve the protracted dispute regarding the actual size of land legally allocated to DAAR Communications as against the area covered by their perimeter fence.

“The whole idea was for both parties to mutually agree for a settlement that would bring about the permanent solution and forge ahead for the development of the FCT and the nation at large.”

The Undisclosed reason why Atiku didn't participate in...

Seven Things You May Not Know About Senate...