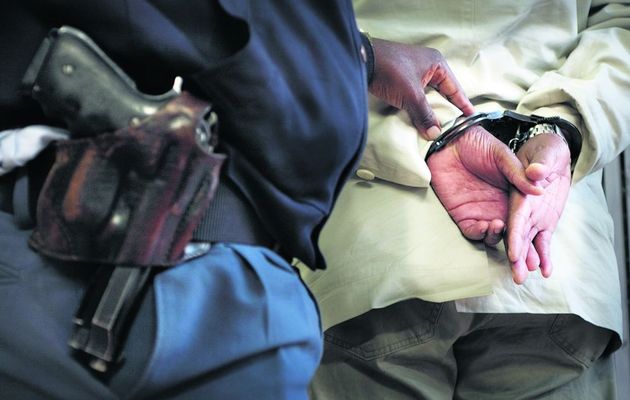 Two security guards, identified as Samuel Linus and Adekunle Ogundana, have allegedly stolen underwears belonging to the daughter of a pastor within a church’s premises in Akure metropolis.

They were yesterday paraded alongside suspected kidnappers by the Ondo State Police Command.

The spokesperson of the state police command, Femi Joseph, while briefing newsmen in Akure, said the daughter of the clergyman washed two of her pants and spread them on the line at about 8p.m. in the presence of the guards and by 6a.m., next day, the panties disappeared.

The police PRO said the suspects, who are attached to the orthodox church, were posted to the apartment, which was highly fortified by a private security outfit in the state.

However, the suspects denied complicity in the offence for which they were paraded.

The suspects allegedly hacked a 75-year-old grandmother, Modupe Olorunfemi, to death at her Owo farm.

They killed her for allegedly giving security operatives information about their nefarious planting and selling of Indian hemp in Owo area.

The police spokesperson said, “The suspects and their accomplices allegedly killed the old woman. The suspects would be charged to court after the completion of investigation.”

The state Police spokesperson, Femi Joseph, said the suspected kidnappers were arrested at a hideout in Emure-Owo Forest during a raid by the Joint Task Force of the security agencies in the state.

Joseph said the suspected kidnappers were arrested “at about 3a.m. by the joint Task Force codenamed Operation crime free, acting on a tip-off.

According to him, the “six suspected kidnappers were picked up at Emure Junction via Owo, where they gathered in a suspicious manner.

“The following items were recovered from them: 16 locally-made guns, 17 cutlasses, 13 knives, seven handsets and N27,820 cash.”

I Will Lockdown Lagos If Lagosians Continue To...

Top ten songs you should listen to when...